After overcoming considerable hurdles, ranging from the COVID pandemic to seemingly endless bureaucratic red tape and expense, a desperately needed childcare center is scheduled to open this September here in Cully. Pequeñitos childcare will serve 70 children at its new facility, located in Morning Star Missionary Baptist Church at the corner of NE Alberta Street and 55th Avenue, next door to Kʰunamokwst Park. The story that has made this upcoming milestone possible connects the church, the childcare business, and the support of the Cully community.

To learn about this partnership, we spoke with Jean Norwood, the Music Minister and Senior Director of Projects and Programs at Morning Star Church, and Karen Messner, owner of Los Pequeñitos daycare.

Morning Star Church, one of Cully’s most prominent African American institutions, celebrated its diamond jubilee in May, marking 75 years of service in Portland. Morning Star was originally located in the Boise-Elliot neighborhood at 106 NE Ivy Street. In February 2007, a fire destroyed the church. Jean Norwood, a longtime Cully resident, recalls that at the time “[Morning Star] was one of the largest African American churches in the city of Portland”. After the fire, the congregation “bounced around to a lot of different locations,” and other churches allowed them to use their facilities. They even held services “at Rose City Cemetery for approximately five years.” The congregation tried to raise funds, secure permits, and get plans approved by the City to rebuild their church on the existing site. Each time the church would submit a permit, “The City would basically throw another obstacle in the way.” This cost the church time and money to get plans redrawn by an architect. Finally, Jean says, “[Morning Star] decided to stop spending money on permits and plans that were being denied.” In 2011, “we finally landed where we are currently” in the Cully neighborhood. The location was previously an Evangelist church that sold the property to Morning Star.

The transition to the new location was a difficult one. The church lost much of its congregation due to bouncing around multiple locations and parishioners getting older. There were over 300 active members before the 2007 fire, and now there are only 25 active members. In August 2018, their pastor of 26 years resigned, and they did not find his replacement until 2021, installing Dr. Kenneth Ransfer, Sr., as their new pastor. Since COVID restrictions were in place, they could not hold the kind of welcome and introduction to the neighborhood for the they would have liked. Not being able to meet regularly with the congregation has led to a decline in donations, adding to the church’s financial struggles. As things begin to open back up, Jean says they are hopeful they can host events at the church again. These hurdles have led to financial difficulties for the church. They have sought out innovative ways to utilize their building and the surrounding 76,000 square-foot property, including providing space for businesses or other organizations – including Los Pequeñitos daycare.

Fifteen years ago, after her daughter was born, Karen Messner started her childcare business in an apartment building along Cully Boulevard. After several years, she moved to a house near Sacajawea Head Start, which allowed her to provide childcare for fifteen children. Since Karen lived nearby, she worked with Sacajawea, Harvey Scott Elementary, and Rigler Elementary schools. As an added benefit to her childcare services, she provides drop-off and pick-up services for kids who attend those schools. As Karen puts it, “We’ve just been growing step-by-step.” Fast forward to today, and she runs three locations. “One [location] is for infants ages zero to three, another [location] is for preschool and school-aged children, and the third location is just for school-aged kids.”

Karen mentions that her daycares serve a diverse group of children, and parents can drop their children off as early as 5:00 am. The fact that Los Pequeñitos is a Spanish language immersion school reflects that diversity. Part of the reason behind Spanish immersion is “for the kids who speak Spanish at home, to [be able to] keep their language and not forget Spanish when they grow up.” Karen points out that white and African American families also take advantage of the program, so their children can learn Spanish. On top of their quality services, Los Pequeñitos is committed to providing affordable childcare to families in need. Los Pequeñitos participates in several programs to help families with the cost of childcare, including Employment Related Day Care, Baby Promise and Preschool Promise, and the Community Childcare Initiative program. They have also applied to participate in Preschool for All through Multnomah County. This commitment to providing affordable childcare in Cully led Karen to seek out a larger space where she could expand her business.

Morning Star Church had ample underutilized space, and Los Pequeñitos was looking to expand to meet the need for childcare in Cully. One day Karen was walking through the Cully neighborhood on her way to Kʰunamokwst Park when she noticed the church next door. Karen, who is outgoing and happy to make connections, walked up to the church. She introduced herself and spoke with a man working outside named Miguel, who referred her to Jean Norwood. Karen explained her plans for an affordable childcare center. Through these discussions, Morning Star recognized the opportunities an affordable daycare operation could offer to both the community and the church. Los Pequeñitos could generate consistent income for the church, while providing a much-needed service to the community.

Dr. Kenneth Ransfer, Sr., pastor of Morning Star Missionary Baptist Church, says it is “a blessing to have Karen Messner and the Los Pequeñitos daycare center to be a part of this very crucial collaboration of church and community.” Pastor Ransfer sees the partnership with Los Pequeñitos as an extension of the congregation’s mission and values. He emphasizes that Morning Star should “serve the community in which we believe the Lord has placed us, and we are so thankful for this relationship. There are many parents who are working very hard to provide for their children, and they need a place where their children can be nourished, where they can be taught, they can grow and they can be safe, and we believe here at Morning Star we can provide that and more.”

Since then, the daycare has been unable to open. This is partly due to complications from the COVID-19 pandemic, and compounded by requirements from the City of Portland. Morning Star and Los Pequeñitos have met with the Portland Bureau of Transportation (PBOT) to discuss the problems with permitting and fees to make the daycare a reality. One requested improvement – which was later scaled back – involved paving a sidewalk for the perimeter of the church at the cost of $300,000. To pave the sidewalk, Morning Star Church would need to dedicate 300 feet of their street frontage to the City. As Jean says, “this put Morning Star and the daycare in a position [between] a rock and a hard place. [Los Pequeñitos] had already spent upwards of $100,000” on renovating the building. She noted that Morning Star could have said no to giving up their property. Illustrative of their commitment to the project, they agreed. After appealing the City’s initial requirement, they now have a year to pave a small section of the sidewalk for roughly $70,000. Morning Star’s area of the Cully neighborhood does not have sidewalks anywhere other than surrounding Kʰunamokwst Park.

Another fee was over $20,000 due to the increased traffic in the area. The City asked them to install a grease dispenser at the location. Karen pushed back on that request since “we are not a restaurant,” and the City removed that condition. The City also required the installation of a firewall at the site, which Karen agreed to. She notes, “it is to protect [people] in case something happens.” The City required them to install a fire alarm system, but initially wanted the system to include the basement that Los Pequeñitos would not occupy. Of course, this added to the cost. Karen remarks, “It has been a challenge. There’s always something after they say this is the last step.” Ultimately, Karen did not have to pay to install a fire alarm in the basement. The continuous hurdles echo the experience that Jean and Morning Star had while trying to rebuild their church after the fire in 2007.

Karen notes, “The need for childcare [is] so big, [since] a lot of [daycares] closed due to COVID. We are just trying to open a childcare facility for our community.” The barriers and delays have been frustrating for both Morning Star Church and Los Pequeñitos. One bright spot has been the Cully community’s response. Los Pequeñitos received a $25,000 grant from NAYA Family Center to help cover the cost of the fees for increased traffic at the location. The funds were part of a large COVID relief effort by Living Cully coalition member NAYA. Working with various funding partners, NAYA distributed over $1M to area businesses. “Based [on] the ongoing barriers Karen was facing with moving and expanding her business into Morning Star, and the… fit within our funding and equity priorities, the selection committee awarded Los Pequeñitos with the maximum allowed award,” says Matt Faunt, NAYA’s Cully business development coordinator.

As of early July, Los Pequeñitos is waiting for final approval from the fire marshal and a final health inspection. Barring any unforeseen issues, they plan on opening up in September to serve 70 children, ages 3 to 5 years-old.

Reflecting on the upcoming opening of the daycare, Pastor Ransfer gives credit to the dedicated individuals who have led this partnership from day one, and persevered to bring it to fruition. “We appreciate the work Karen and her husband, Isaac, and others in their organization, have put in to the church,” he says. “I’m [also] very grateful for Sister Jean Norwood, who has brokered this whole fabulous relationship that we have. We want to just encourage the Cully community to help out in any way that they can, so that we can be the loving community that the Reverend Dr. Martin Luther King, Jr., so eloquently spoke of and wrote about. We are very grateful for this opportunity to serve.”

After so many delays, come September Karen is planning a big bash as an introduction to the community. The event will have delicious Mexican food and a live mariachi band to commemorate the occasion. Keep an eye out for more details to come. Karen and Morning Star look forward to celebrating with the community!

If you’d like more information on renting space or partnership opportunities, contact Jean Norwood at Morning Star Church at jnorwood97218@yahoo.com or call/text 503-380-2660. 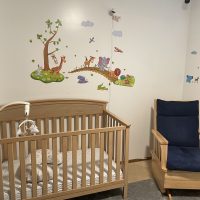 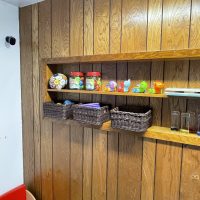 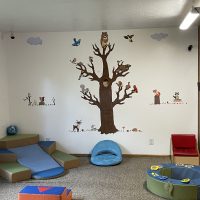 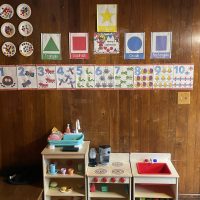 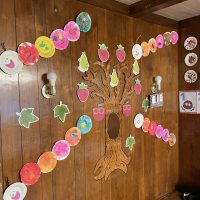 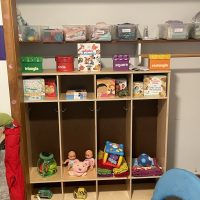 Cubbies for the kids 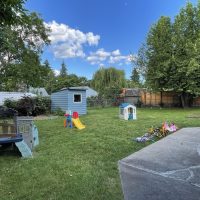 Large area for kids to play 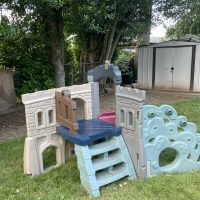 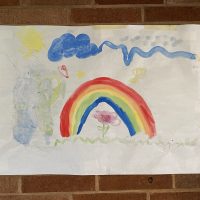 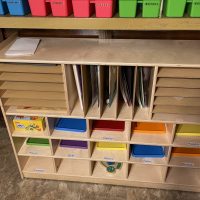