Published: October 08, 2020 by Brian Garcia | Comment on this Article

Launched in order to address the most prevalent concern shared with us by community members in the face of the COVID-19 pandemic, Living Cully’s Renter Relief Fund has reached its final goal and raised over $150,000. This money has been distributed to over 265 renter households in the Cully neighborhood that have lost income as a result of COVID-19. 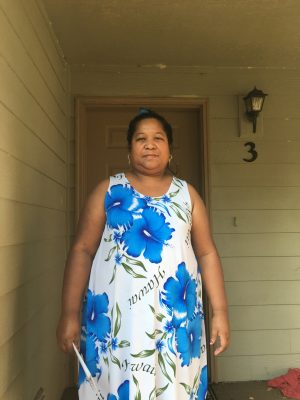 When the COVID-19 pandemic triggered the abrupt shut-down of our nation’s economy, schools, and workplaces in March, Living Cully hit the phones to call some 80 Cully residents who have been active in our community organizing programs. Through these conversations, we learned that residents’ biggest concern was their ability to pay rent — and therefore stay in their homes – as they lost income and saw their household expenses climb.

Renters told us that they were losing their jobs, having hours reduced, and facing other financial hardships. Meanwhile, entire families were home all day, leading to increased utility and food expenses. The impact was especially acute for Black, indigenous, and people of color renters, who disproportionately work in the service sector and were being laid off (rather than having the option of working at home and spending their time on Zoom meetings). Undocumented immigrants were further at risk because they did not receive the various federal relief payments that provided a temporary lifeline for many people.

Meanwhile, Living Cully was receiving emails and phone calls from Cully neighbors who had received federal checks but were still employed, expressing a desire to donate their funds to families in need. In response, Living Cully launched the Cully Renter Relief Fund in April.

Nika Thompson received support from the Cully Renter Relief Fund in June. “Money from the fund allowed me to be able to buy extra food and other items for myself. It really took some of the extra stress that I had off of me,” Nika said. She added, “It put a very big smile on my face to let me know that there actually were some people out there that were willing and able to help me and my family out in my time of need.”

The success of the fund has been led by individual community members. Our Initial modest call for $10,000 in donations was quickly raised to $20,000 after an overwhelming response from our community. Six months later, we passed the $95,000 fundraising mark, on our way to a final total of $150,000! Donations have come almost entirely from individuals — with 300 donors contributing an average of $235 — but also from several businesses, banks, non-profits, and churches, and a generous contribution from the FamilyCare Health foundation. Along with Nika Thompson, renters who have received assistance have frequently expressed their deepest gratitude to those whose donations made the Cully Renter Relief Fund possible.

The fund’s rules, application criteria, and outreach plan were developed in consultation with members of the Cully Housing Action Team. Living Cully staff and volunteers, including teachers and administrators at Harvey Scott and Rigler elementary schools, reached out to community members to spread the word about the fund and to assist anyone who needed help with applying, leading up to the deadline in early June. 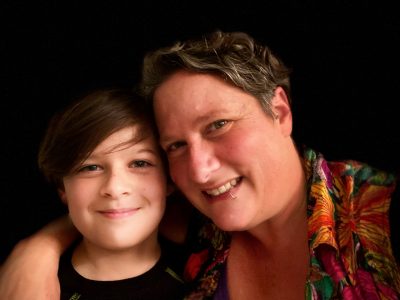 Image Description: Sandy, a volunteer, with her son, who is a student at Rigler School.

Sandy Bacharach, who has a child that attends Rigler, volunteered to make phone calls to applicants and recipients. Sandy was happy to volunteer because it provided an opportunity “to have some purpose and connection and contributing in ways that feel COVID-safe.” It was also personal for her since many of the families she contacted go to school with her child. “This is my community, this is all of our community. There are people that I know who have benefited from this fund,” Bacharach stated. Being part of the Cully Renter Relief Fund effort has provided Sandy with an opportunity to feel a connection with her community during a time when most feel less connected than ever. Sandy mentioned, “It was fun to be able to call people and basically say ‘You won the lottery!’ during these challenging times.”

Our outreach strategies and the application criteria prioritized people of color and households that did not receive federal relief payments. The fund was open to renters who had lost income due to COVID who live in the 97218 zip code, or who had been displaced from the area within the past five years. Outreach to renters happened through door-to-door flyers at apartment complexes and mobile home parks, social media, text messages and email lists, and neighborhood schools. Staff and volunteers screened every application and called those with incomplete information. Applicants who were selected initially received between $550 and $700, based on household size and the percentage of income that had been lost due to COVID. Once we had distributed the initial funds to recipients, we provided additional assistance ranging from $200 – $600 to households based on a lottery system

While it does not make up for what was lost due to COVID, this program has been a huge success and would not have been possible without the kindness of individuals who donated to the fund.

Thanks again to everyone who donated and spread the word about the Cully Neighborhood Renter Relief Fund!