Published: April 19, 2018 by Living Cully Communications | Comment on this Article

After working with our staff and community to brainstorm and test different names for the future apartments at the Living Cully Plaza site, we are happy to share that the new name of this community will be Las Adelitas.

‘Las Adelitas’ is a name rich with meaning and significance. During the Mexican Revolution many women, who became collectively know 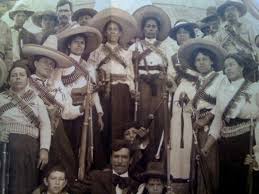 n as Las Adelitas, took up arms and supported the fight for freedom alongside the men. These women played a variety of roles within the army including camp and medical care, soldier, spy, and some even commanded troops. They traveled with the army throughout the revolution, and unlike the men, they did it all on foot since they were not allowed to ride horseback!

We are especially excited for the opportunity to honor these strong women at this particular site. Las Adelitas remind us that women have always been critical to social change and ongoing struggles for justice and liberty, in spite of the limits placed on them by society and the fact that their contributions are often overlooked by history.  Prior to the community’s purchase of Living Cully Plaza, the site was home to an adult entertainment complex that harbored human trafficking. Replacing an institution that used to exploit women with one that honors the legacy of strong, inspirational women is powerful to us and to the community.

On this International Women’s Day we are proud to celebrate the countless contributions that women make to our world, and we hope that our Las Adelitas community will help us honor these contributions every day of the year.

A rendering of the future Las Adelitas site.