Published: December 05, 2017 by Living Cully Communications | Comment on this Article

Nestor Campos and Raquel Stewart have been teaching the Promoting Active Transportation and Health (PATH) curriculum for two years under the Metro Nature in Neighborhoods Grant. Teaching in the 5th grade classrooms at Scott K-8 School offers an exciting opportunity to expand the impact of the program.

Taught over the course of six, the PATH curriculum covers topics like active transportation, mapping, Wayfinding, advocating for your neighborhood and more.

“The main objective [of the course] is to motivate students to use active transportation, and connect it to the positive impact on their health and the environment,” said Nestor Campos, the Education Coordinator at Verde.

From October to December 2017, Nestor and Raquel are teaching the curriculum in the three 5th grade classrooms at Scott Elementary School, in spanish and english.

The course has been taught to smaller groups of students in the past. In 2016 Nestor and Raquel partnered with Hacienda CDC’s after school program Expresiones twice. Additionally, they partnered with the Early College Academy at the Native American Youth and Family Center (NAYA) during the winter of 2017, which offered a unique opportunity to work with older students who are making more autonomous decisions about their transportation around the neighborhood, according Raquel, the Bilingual Program Developer Assistant at OMSI. Nestor and Raquel keep the curriculum flexible to the needs of the classroom based on grade and time allotted.

Teaching at Scott is unique, because Raquel and Nestor are reaching about 70 students by integrating into all three 5th grade classrooms. These classes have had the most consistent attendance, which enables the instructors to more easily build off the lessons from the previous week, said Raquel. 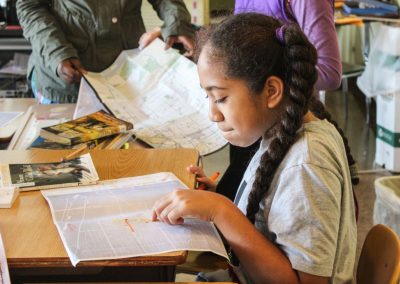 During class on November 28th, students learned how to map routes in the Cully neighborhood. Using a scale and some cord, students measured the distance to walk or bike between two landmarks on their maps relevant to their lives. Many students started their routes at Scott, and extended to their homes, Ira’s Deli, their parent’s store, Rose City Park, Albertsons and beyond.

As Nestor and Raquel wrapped up their classes, they reminded students of their homework: to look for safety hazards along the routes as they walk in the neighborhood throughout the week. The hope is to encourage students to make observations about their environment and advocate for improvements in the neighborhood.

“One of the main things [my students] enjoy is that [PATH] revolves around their neighborhood. When they look at the maps they get excited because they know the places on the maps,” said Evelyn Coca, a 5th Grade Immersion teacher at Scott School.

The Cully neighborhood was annexed into Portland in 1984, and since then the City has invested in building parks, sidewalks, and roads at a slower rate than other parts of the City. While the lack of infrastructure has kept housing costs low, many routes to green spaces, stores, and other neighborhood resources are unsafe.

Giving students tools to advocate for active transportation infrastructure in their  neighborhoods plays a prevalent role in the curriculum. Student’s are also exposed to professionals in the transportation field. The final class will be a career day where students will talk to people who are in transportation related careers in nonprofits and government agencies.