Published: March 08, 2019 by Evelyn Easton Koehler | Comment on this Article

We did it! On Friday, March 1st, the Oregon Housing Stability Council unanimously voted YES to approve $4.3 million in state funds for St. Vincent de Paul (SVDP) to purchase the Arbor Mobile Home Park and keep rents affordable. St. Vincent de Paul expects to become the owner of the Arbor at the end of March.

With the state funding and a loan from the Network for Oregon Affordable Housing (NOAH), St. Vincent de Paul expects to complete the purchase of the Arbor Mobile Home Park by the end of March.

The state funds received by St. Vincent de Paul include a budget for park repairs and development costs so that these kinds of expenses will not cause an increase in rent.

How We Got Here

This was the third month in a row that Arbor neighbors traveled to Salem to share testimony and advocate for state funding. Susan Knoke testified in January, alerting the council to the funding application. In February, Sean McDonald, Luz Gomez and Melecia Torres testified.

Members of the Housing Stability Council shared during the meeting how meaningful it was for Arbor residents to attend three different meetings to share testimony and support for this funding application.

Council member Charles Wilhoite added that hearing resident testimonies helps to remind the council that when they make decisions about housing, they are talking about people, not just a house.

March 1st was also Melecia Torres’ 10-year anniversary at the Arbor, and the timing of these two moments speaks to all that Arbor residents have accomplished. While Melecia did not always plan to stay at the Arbor, she now wants to stay part of the community that has grown at the park. Starting with meetings in Melecia’s driveway a few years ago, residents have come together to challenge unfair rental agreement changes, advocate for better street lights, and now organize with St. Vincent de Paul to purchase the park and keep rents stable and affordable.

“We stayed here, but we worked to improve the community. And now look at what we’ve accomplished,” said Melecia.

This is the 8th park owned by St. Vincent de Paul in the state of Oregon. Their ownership will bring stable rents and greater opportunities for residents to organize and have a voice in decision-making at the park. 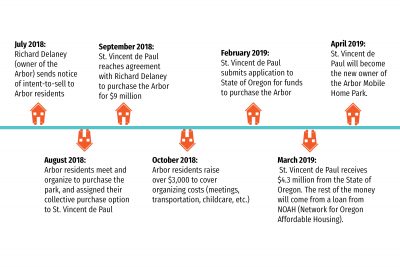