Published: July 11, 2018 by Cameron Herrington | Comment on this Article

July 10, 2018 — The Portland Planning and Sustainability Commission (PSC) voted today to support a new zoning measure that would help preserve 56 manufactured housing parks in the City of Portland. If approved later this summer by City Council, the Manufactured Dwelling Park zone would establish mobile home parks as the only allowed use of the properties where they currently exist. 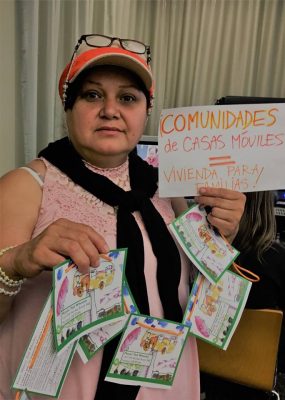 The effect of this zone change would be long-term housing stability for some 3,000 low-income families who could otherwise face displacement if their parks are closed for redevelopment — as has happened at several mobile home parks in Portland in recent years. While cities and counties around the country have established dedicated zones for manufactured housing parks going back as far as the 1970s, Portland is poised to become the first jurisdiction in the state of Oregon to do so.

The zoning proposal received strong support from the PSC, via a 7-2 vote, which is the first hurdle that a land use decision must clear before going to the Portland City Council for final approval. Council action is expected later this summer — and not a moment too soon, with rising property values adding to redevelopment pressure.

“This zone change is an essential measure in the larger effort to preserve affordable homes throughout Portland,” said Cameron Herrington, Anti-Displacement Coordinator with Living Cully. “In addition to preventing displacement of 3,000 families, we anticipate that this policy will make non-profit and tenant co-op ownership of parks more likely in the future. Investors who want to shut down parks and redevelop them will no longer be in the market for these properties.”

The zone change recommended by PSC today was inspired by the 2016 campaign to save the Oak Leaf Mobile Home Park from being shut down after an investor sought to redevelop the property with higher-end housing. At a cost of several million dollars, the Portland Housing Bureau partnered with the Oak Leaf residents, Living Cully, legal aid attorneys and St. Vincent de Paul to interrupt the planned sale and instead purchase the Oak Leaf to preserve it as affordable housing. The proposed zone change will protect 56 mobile home parks citywide, without requiring the community and the City to fight off similar redevelopment threats.

On the heals of the Oak Leaf campaign, Living Cully worked with mobile home residents and allies over the last two years to propose and advocate for the new zoning designation, based on similar policies in cities such as Albuquerque, NM; Boulder, CO; and Tumwater, WA.

Stay tuned to www.livingcully.org/zoning for more news about this campaign, including details of the City Council vote later this summer.

Posted in Mobile Home Program, News | Comment on This Article