Published: June 28, 2018 by Living Cully Communications | Comment on this Article

Come celebrate the Grand Opening of Cully Park on Saturday, June 30th, from 11–4 p.m.! The event will feature live performances from groups like Dina y Los Rumberos, Native American drumming and storytelling, youth nature activities led by the Columbia Slough Watershed Council, soccer clinics and more! The event is free, family-friendly and open to all. Click here for more details.

The Cully Park Grand Opening celebrates years of hard work put in by the Let Us Build Cully Park! coalition led by Verde, including the Cully community, Native community, Portland Parks & Recreation, city and state government officials, corporate sponsors and non-profit stakeholders. Together, the coalition has transformed a former landfill into a 25-acre city park in Portland’s Cully neighborhood, one of the most diverse neighborhoods in Oregon.

“For me, it’s like a dream,” said Wendy Yah-Canul, Cully resident. 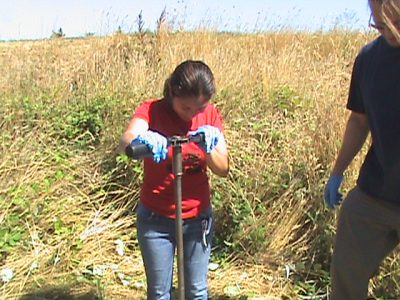 Wendy has been involved in the park development from the early stages. In 2011, she participated in a citizen science project to test the soil at the former landfill, a first step in evaluating if the site would be safe for a park. Back then, the ground was full of trash and holes that made it unsafe to run or play.

Other projects paved the way for the 25-acre Cully Park project, such as the 72nd Green Street construction and Community Garden. Verde Builds—Verde’s general contracting social enterprise program—served as the general contractor for the 72nd Avenue Green Street construction, a road that  now provides safe transportation access to Cully Park and the Community Garden.

Wendy remembers when 72nd used to be gravel and filled with potholes. Now, the street has pervious sidewalks and bioswales. Wendy participates in a Cully Walking Group that meets twice a month at Living Cully Plaza to walk along this street to Cully Park, pick up trash and report any safety hazards.

Wendy and her neighbors also use the street to access their garden plots at the 72nd Community Garden. The garden was another stepping stone project along the path to build the 25-acre Cully Park. Wendy looks forward to working in the garden with her neighbors while her kids can play nearby in the youth play area at Cully Park.

Community members have continued to be involved every step of the way during the park design and development, including the youth nature play area and the Native Gathering Garden.

The Native Gathering Garden is the first feature of its kind at a City of Portland park. Beginning in 2010, a committed core group of Native and non-Native community leaders turned to our Portland Urban Indian community to define 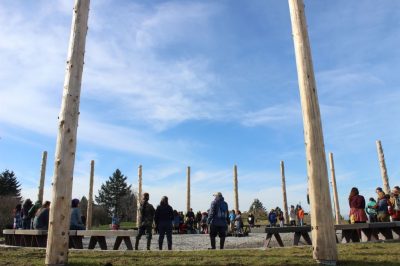 The Let Us Build Cully Park! coalition worked to ensure the project involved community at other levels, as well. Verde Builds achieved 70% women- or minority-owned contracting at Cully Park, supporting equity-centered green workforce opportunities on a project that serves low-income and people-of color-communities.

“Thank you to the whole community,” said Wendy. “For me, it was a beautiful experience to be involved from the beginning.”

“Cully Park is a statement about the power of community, and I want to especially thank the hundreds of Cully adults, families and children who worked so hard for so long. My friends, you did it—you designed and built a park which everyone can enjoy and which will serve generations of Portlanders,” said Alan.