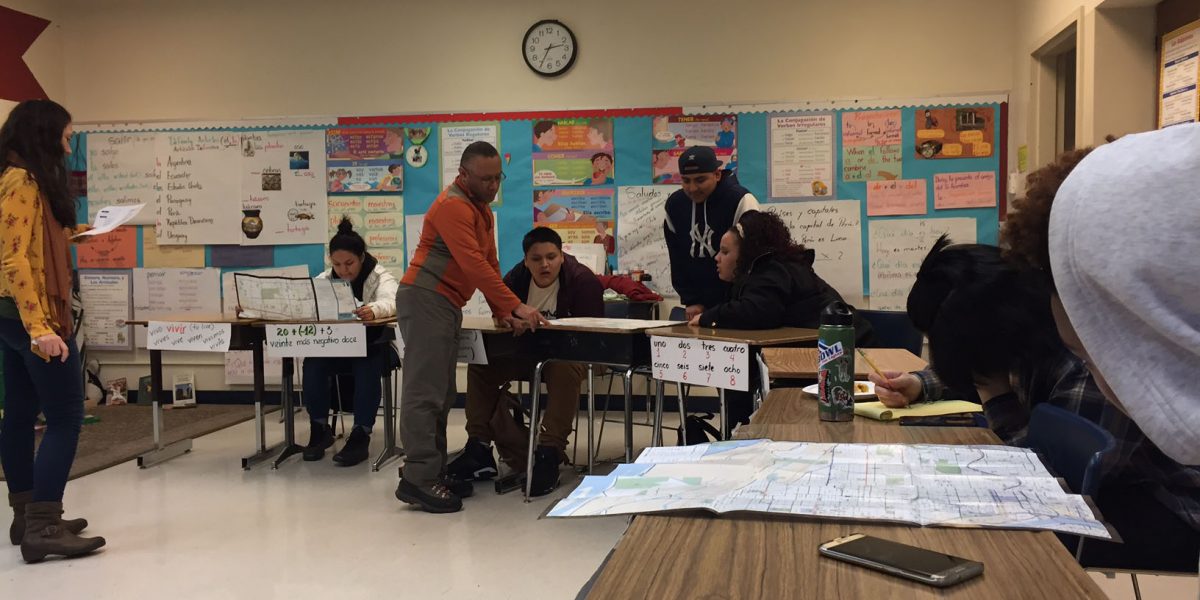 Nestor Campos, Verde Education Coordinator,  in collaboration with OMSI and with funding from Metro’s Nature in Neighborhoods grant program, developed a series of classes called PATH, Promoting Active Transportation and Health for students in Cully. The series began as nine classes and has been adapted to be taught in High Schools and condensed into six. The classes cover topics such as active transportation, health and environmental impacts, mapping, Wayfinding and advocating for neighborhoods. The sequence ends with a career day, where the students get to talk to people who have careers in nonprofits and government agencies to be able to ask them questions about the things they’ve been learning over the past weeks.

The class sequence was taught twice in Hacienda CDC’s after school program in the spring and fall of 2016 and is currently being taught at the Early College Academy at the Native American Youth and Family Center (NAYA). In the fall the class will be taught at both Rigler and Harvey Scott Elementary.

At NAYA, the classes have been taught in both English and Spanish, Nestor is the primary teacher in Spanish, while he lets his colleague from OMSI, Raquel, lead the classes in English. As class began on a Wednesday afternoon, Raquel asked students to mention some words that came to mind when she said the word maps. Responses were things like, complicated, scale, destination and compass. Students were then given bike maps of NE Portland and the Cully neighborhood along with an explanation, as well as a different unlabeled map, of just the Cully neighborhood. Students used their labeled map and knowledge of the neighborhood to fill in street names, as well as labeling any other places they recognized. Students were given compasses as well as map wheels, or measuring tools and explanations to be able to better understand how to to read maps and their components. Students were asked to create their own legend with any symbology they chose.

There was then a discussion about the places these kids wanted to walk to, that they couldn’t because the way felt unsafe. Students listed a number of issues with the infrastructure that presented barriers to the area being walkable, from lack of sidewalks and crosswalks, to high traffic areas. Students were asked to keep this in mind in the coming weeks and take note of those places because this will be a topic they go over in an upcoming class. Students with smartphones have downloaded a pedometer app and have been keeping record of how far they are walking every week, while receiving encouragement from the Nestor and Raquel to keep those numbers high.