Published: September 23, 2016 by Anna Gordon | Comment on this Article 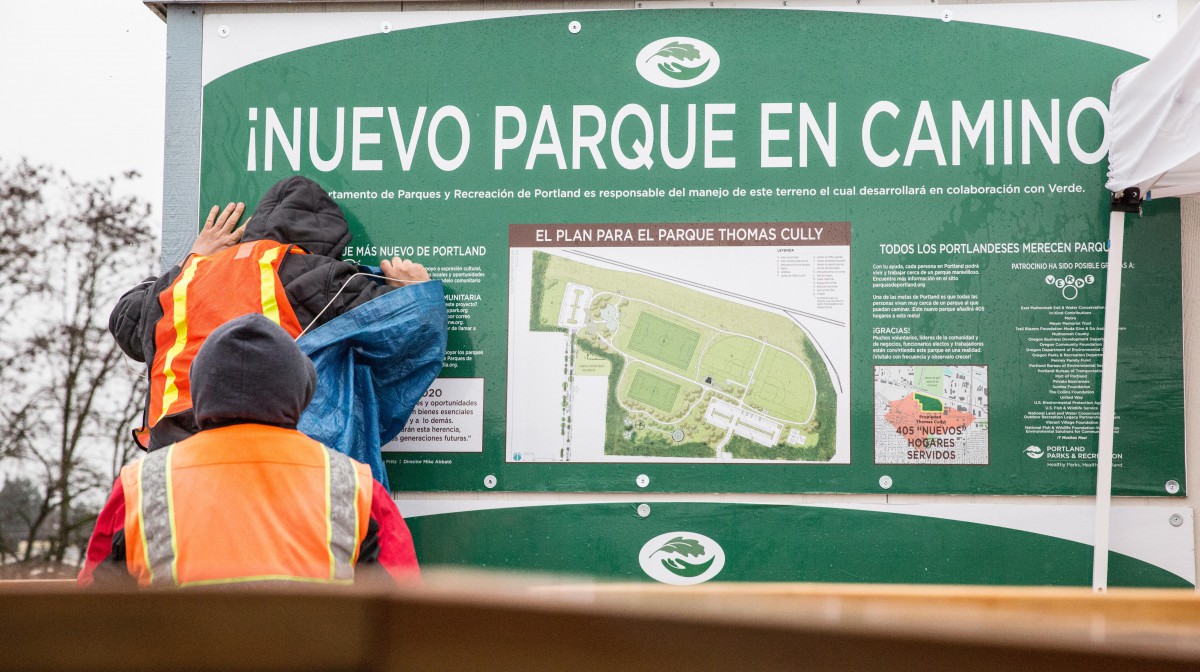 Portland Parks Commissioner Amanda Fritz, joined by Cully neighborhood representatives and Verde, announced $3 million in additional funding for the future Thomas Cully Park, NE 75th just north of Killingsworth. Verde, the Let Us Build Cully Park coalition and Portland Parks & Recreation are the lead partners in the public/private partnership to transform the former landfill (and before that, a sand and gravel mine) into a developed, 25-acre city park. The park project now heads into the homestretch for fundraising, looking to raise a final $1 million.

405 Portland families who currently do not have access to a park or natural area (defined as a half-mile walk) will be served by Thomas Cully Park.  Data show that central-northeast Portland is second only to the area east of I-205 in terms of the greatest need for parks and natural areas in the city.

Parks Commissioner Amanda Fritz made the funding announcement last night at the Portland Parks Foundation’s 15th anniversary celebration. The funds to build Thomas Cully Park, located in a neighborhood acknowledged for a deficiency of parks and green spaces, come from System Development Charges (SDCs), and not General Fund tax dollars. SDCs are one-time fees assessed on new development to cover a portion of the cost of providing specific types of public infrastructure required as a result of this development. Portland Parks & Recreation (PP&R) previously contributed over $1.5 million in SDCs towards the Thomas Cully Park project, bringing PP&R’s total contribution to over $4.5 million.

In addition to previously announced government investment, the partners in the Thomas Cully Park project are very grateful to House Speaker Tina Kotek and to Multnomah County Commissioner Loretta Smith.  Each of these elected leaders worked hard in recent budget sessions to secure $300,000 in state funding and $190,000 from the County towards the park construction.

“I am thrilled with all the collaboration evident in this project. The City is pleased to make this additional investment to help see the park in Cully become a reality,” says Commissioner Fritz. “This project is innovative because it is being led by the community, and the City is proud to be a partner in realizing the dream. It is exciting to think of a new, large park in one of the most diverse neighborhoods in the state – in an area that is deficient in parks.”

Buoyed by a $500,000 federal grant in April 2015, plus PP&R funding, funding from other governments, foundation grants, and contributions from private citizens and companies, the effort to fund Thomas Cully Park has now raised more than $9.6 million. The park’s fundraising target is $10.6 million. Last night the Portland Parks Foundation announced the start of a campaign to raise half a million dollars to cover 50% of the remaining gap, while Verde will continue to collaborate with partners to complete fundraising.

“There’s a reason we named our campaign Let Us Build Cully Park! — no single organization or community or jurisdiction could build it alone, but together we can transform essentially a mountain of trash into a new asset for Cully and for Portland,” says Alan Hipólito, Verde’s Executive Director. “Today, we’d like to express our deepest appreciation to our partners Commissioner Fritz and Portland Parks & Recreation for this milestone investment, and to recognize PP&R’s many other, indispensable contributions to the project. Now, we’d like to invite new partners to join us and the Portland Parks Foundation by making these final, critical contributions to build Cully Park.”

The Cully neighborhood is recognized as the most diverse in Portland, perhaps in the state. Cully and parts of east Portland do not yet enjoy the same access to parks and green spaces as the rest of the city. 60% of residents in the future Thomas Cully Park’s service area are people belonging to traditionally underserved communities, and 45% are considered low income (annual household income of $40,000 or less).

A final push to the finish

“The goal is within reach,” says Portland Parks & Recreation Director Mike Abbaté. “But a sense of urgency remains. Though we certainly have cause to celebrate, we realize that we need a bit more private investment, community involvement and collaborative work to see the first phase of Thomas Cully Park completed.”

Since 2012, Verde and PP&R have involved over 600 community members in the project, including 191 youth. Community members have overseen the site’s environmental assessment, designed the community garden, playground and Intertribal Gathering Garden, and developed safe routes for walking and biking to the park.