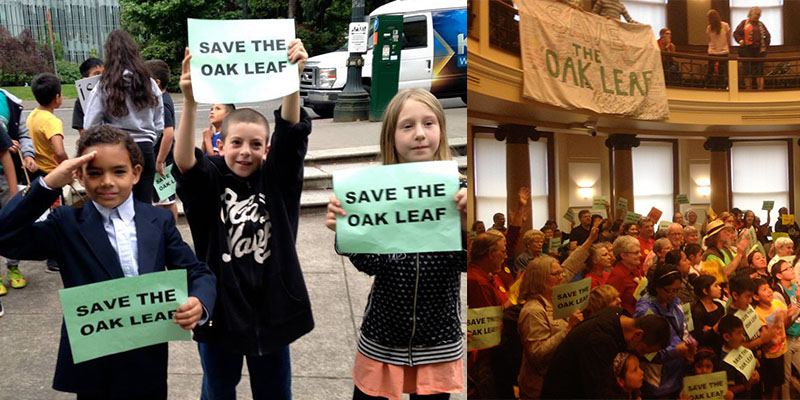 In January 2016, the 30 families living at the Oak Leaf Mobile Home Park (4556 NE Killingsworth) began hearing rumors that their park would be sold and shut down, and they would be evicted. Unable to afford housing anywhere else in Portland – and facing other significant challenges such as disability, illness and old age – many feared they would become homeless. Five months later, the Oak Leaf’s residents are on the cusp of doing what no one in Portland has ever done: purchasing the park themselves and operating it as a resident-owned, affordable housing cooperative.

Amid swirling rumors about the park’s imminent closure, and with the support of organizers from Living Cully and St. Charles Church, Oak Leaf residents have waged a complex and ambitious campaign to save their homes. Oak Leaf leaders were first introduced to Living Cully by their across-the-street neighbor, Dennis Karas, who regularly delivers food donations to the Oak Leaf and struck up friendships with the residents long before the threat of the park’s sale ever surfaced.

Organizers quickly learned that the Oak Leaf’s out-of-state owner had likely violated Oregon law by failing to provide notice to residents of her intention to sell the park. Soon after, the owner confirmed that she did indeed have a sale agreement in place with a developer that planned to kick out all 30 families and close the park. Heroic lawyers Megan Dorton and Christina Dirks from Legal Aid Services of Oregon took up the case and prepared to take legal action against the owner – working side-by-side with residents to document years of questionable management practices and neglected health and safety issues, in addition to the illegal pending sale. Meanwhile, another non-profit, CASA of Oregon, came onboard to help residents make a competing offer to purchase the park.

With this “carrot and stick” strategy, residents hoped to persuade the owner to accept their purchase offer in order to avoid a lawsuit. In early June, against all odds, that is exactly what happened; the owner signed a purchase and sale agreement with CASA, on behalf of the Oak Leaf residents. But one small issue remained: the residents could not afford the purchase price.

Oak Leaf residents were about $1.5 million short of what they needed to purchase the park and make needed repairs and infrastructure upgrades. The residents and their allies from the Cully Housing Action Team (CHAT!), St. Charles Church, several other NE Portland faith communities, and others from the Cully neighborhood turned out en masse to two City Council hearings in May and June, calling for revenue from the City’s new Construction Excise Tax to be used to “Save the Oak Leaf!” The 100+ supporters gathered at City Hall erupted into cheers at the June 16 hearing when Housing Commissioner Dan Saltzman announced that Oak Leaf preservation would be the first project he recommends for funding with the new tax revenue. One way or another, Saltzman told the assembled crowd, “We’ll get it done.”

CASA now has a couple of months to fully analyze the property, investigate repair needs, help the residents acquire a loan that will be repaid with their monthly rents, and align funding from the City and other sources. The residents, meanwhile, are hard at work forming a legally-recognized cooperative, selected their first board of directors, and preparing to take ownership of the park.

The Oak Leaf residents and Living Cully extend heartfelt gratitude to all of the Cully neighbors and supporters who attended a City Council hearing, sent an e-mail, signed the “Save the Oak Leaf” banner, or made a phone call urging the Council to help save the park. Your support and solidarity have been instrumental, and will continue to be needed as the residents dive into the long-haul task of fixing up and managing their park. Keep your eyes peeled for an invitation to a community celebration once the deal is final and the park is officially in the hands of the residents!

Media coverage of the fight to save the Oak Leaf: