Published: February 13, 2016 by Anna Gordon | Comment on this Article

Living Cully  has come together with community members to design a temporary Wayfinding system for the Cully neighborhood; and we want your feedback! The Wayfinding system is a set of informational and directional signs to improve access to local parks and greenspaces. We’re also advocating for investments to overcome barriers to accessing parks and green spaces by foot, bike, skate and public transportation.

There are six (6) different parks in the Cully neighborhood but there is limited access. The Living Cully Walks program  started in October 2013, funded by Metro’s Regional Transportation Options grant. Since then, Living Cully has organized twenty-one (21) activities to record the barriers to accessing parks in the Cully Neighborhood by foot, bike, skateboard and public transportation. Over 300 people participated in the Living Cully Walks activities over 2 years.  During our events we planned a route that is safe for our participants. By recording problem areas on a map, like the example below, we collected feedback on transportation barriers. Common barriers included, lack of sidewalk, lack of lighting, and unsafe cross walks. 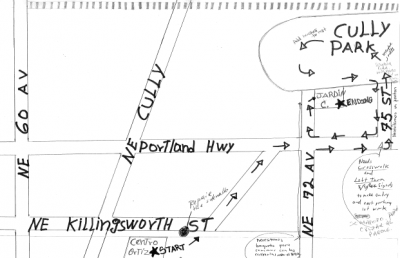 Neighborhood parks include: Whitaker Ponds, Cully Park, Colwood Golf Center, Khunamokwst Park, Wellington Park, and Sacajawea Park. At our events, we made the community aware of not only the different parks available to them but also we asked for their input about what things they want to see happen to the neighborhood to make it safer for families while traveling to and from various locations. 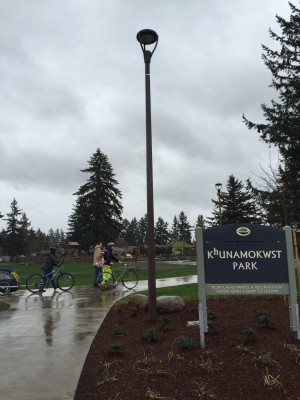 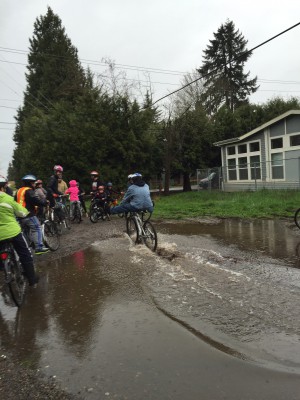 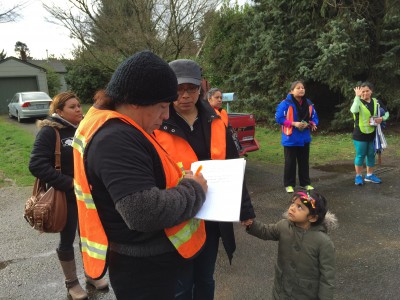 From community feedback we discovered that one of the barriers is the lack of visible signage about parks in the neighborhood and how to get there safely. In June of 2015 Living Cully planned a Wayfinding workshop to design a system of signs that help people get to parks in Cully. From the data collected by community members over the past two years, we identified 20 locations to introduce  temporary Wayfinding signs. We focused on sign placement to guide cyclists, pedestrians and transit riders to target parks. The design process provided an opportunity to educate and begin community design of a signage system to get people to parks in the neighborhood. With the help of Rebecca McLain, from the Institute for Sustainable Solutions  at PSU and a student from Portland State University, Kevin Donohue, we were able to create maps for the Wayfinding system.

The temporary Wayfinding signs were installed on December 15th with residents of the Cully neighborhood. There have been three (3) activities so far  to collect feedback from different residents about the signs;  their design, effectiveness, readability, and location. This feedback will be used to revise the Wayfinding system, and create a permanent system of signs for the neighborhood. Our latest activity was held on February 8, where we had Portland Parks & Recreation come out and have a tour of the signs and gathered their feedback.

Have you seen the Wayfinding signs? We would love to hear your feedback on this temporary system, so we can create a permanent system of Wayfinding signs for Cully. Follow this link to give us your input through an online survey!