Published: November 18, 2015 by Anna Gordon | Comment on this Article 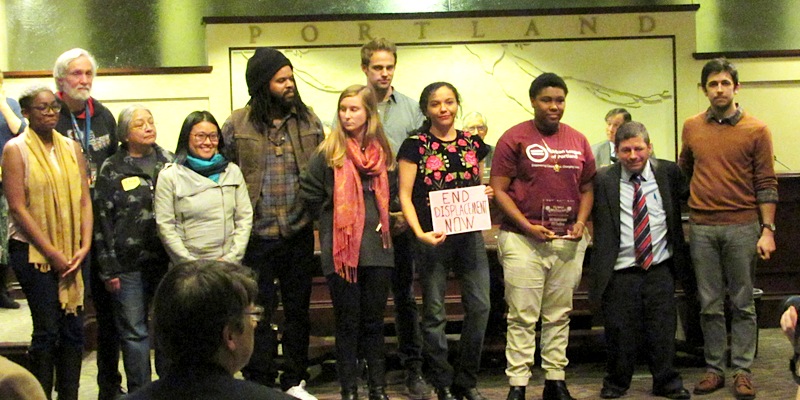 PORTLAND – “Thanks, but no thanks.” A coalition of 30 community-based organizations refused to accept an award from the Portland City Council last night at a ceremony at City Hall. Saying the award is premature until the group’s demands are met by the City Council, coalition members delivered an “unacceptance speech” and placed the award plaque on the dais in front of Mayor Charlie Hales, as the rest of the commissioners looked on. The speech was met with an enthusiastic standing ovation from a packed City Council chambers.

The Anti-Displacement PDX (ADPDX) coalition was presented with the annual Spirit of Portland award by Commissioner Steve Novick in recognition of its campaign to include anti-displacement and affordable housing measures in the city’s new 20-year Comprehensive Plan. The group’s efforts resulted in over two dozen measures being added to the draft plan adopted by the Planning and Sustainability Commission in July. However, despite unanimously declaring a housing “state of emergency” last month, not one of the five City Council members has publicly endorsed the Comprehensive Plan measures championed by ADPDX.

Coalition spokesperson Llondyn Elliot called on the City Council to “just say yes” to the policies that are already included in the draft plan. Elliot said that the coalition’s work is unfinished, and it is up to the commissioners to “make this award real.” The group vowed to claim its award once the final Comprehensive Plan is passed with all of the anti-displacement measures intact.

City Council’s vote on the final Comprehensive Plan is not expected until early next year. The Council’s first public hearing on the plan is scheduled for Thursday afternoon at City Hall.